Thinking for the customer and being upfront with them 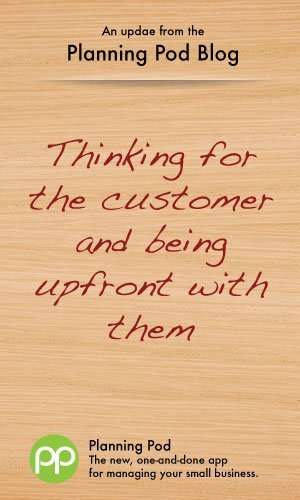 Bear with me a moment ... this story might seem like I've gone down a customer support rabbithole, but I want to relate it to you for a specific reason. I was at REI today to exchange a pair of shoes and to pick up a fit kit for my Thule rack (I'm taking it off my Mini and putting it on our Prius). I have an older Thule rack (6-7 years old), and in the past with Thule racks, you needed a fit kit to match the particular foibles of your car's roof and gutters so the rack would fit it precisely. So I showed the young man in the car rack area precisely what parts I already had (even brought in the manuals) and he looked and said "You need part XYZ, but we don't have it here, so just go to customer service and order it." I went to customer support, where they told me the part is on backorder and that my best chance of getting it is to go to another local store. I had them call ahead to a store that was 12 miles away, so I drove there and picked it up. Halfway home, I was at a stoplight, so I looked at the part and quickly discovered that they had not provided me with the part I had wanted. Because Thule updated it's fit kits, the young man pointed me toward a new kit that's $175 more than the old kits (which many stores still stock, but REI doesn't because they only carry fairly new inventory). This pissed me off so much that I went home and ordered the old kit online from Eastern Mountain Sports - the one I wanted - with the idea that I'll just return the more expensive kit I bought at REI. But this story isn't over yet because I get an email about 2 hours after I ordered old kit online that they also have that kit on backorder (which they never told me about upfront when I was ordering) and that I will be charged when it ships, which they don't provide any idea whether that will be 2 days or 8 months from now. After schlepping around all day for this stupid part, I was about to put my fist through a wall, but instead, I thought about what I could learn from this experience, and here are two lessons to take from my frustration: 1. Always be thinking for the customer - I had told the guy at REI what I wanted to do with the parts that I had, and instead of just looking at a catalog and finding a part number, he should have taken a step back and thought about my scenario. He should have said to himself, "This guy wants a part that's discontinued and that we don't carry, and I should let him know about this before I 'recommend' a much more expensive part to him." Even if I would have been a little frustrated and probably not bought the new part at REI, I would have been thankful for his advice and thought "Hell, I love a company that will refer away business if it's best for the customer." Instead, I'm never, ever going to trust REI again with my car rack or, frankly, anything very technical. I'll go there to buy clothes and shoes and sleeping bags, but that's it. 2. Always be upfront about availability and how you deliver your service - People will only get pissed if you order something and they find out later that you left out a critical piece of information regarding what they ordered. I got pissed because they didn't tell me the part was on backorder when I ordered it, but this can apply to a variety of scenarios. When we launched our first software-as-a-service 5 years ago, for no conscious reason we didn't emphasize enough that our product was Web-based, and we got a lot of blowback from some of our initial customers who were expecting a downloadable piece of software. So we changed our site quickly to set customer expectations more definitively. There ... now I'm going to have a stiff drink and focus on relaxing a little bit.

Get FREE insider tips and ideas sent directly to your inbox.